Specialised Imaging reports on how its Lightweight Optical Motion Analysis (LOMA) system has been used to optically track an aircraft for several kilometres while simultaneously capturing the thermal signature of the aircraft over the same distance.

Fitted with a a Basler high resolution optical camera with a 50mm Nikon lens and a FLIR X8500SC thermal imaging camera with 200mm lens, the LOMA system was used to track approximately 15Km of the plane flight. In poor weather or night time conditions the data from the thermal camera would be the preferred way to track the target.

In this field trial the LOMA system used a "hot spot" tracking algorithm focused on the aircraft nose. However the software has an offset function that allows the centre of the field-of-view to be moved away from the specific area being tracked. This feature is particularly useful when looking at rocket plumes which are at the rear of the projectile but the area of interest is the front or mid section. Further along the flight of the tracked object the offset can be reduced or removed as the tracking point changed from the front to the centre as the target changes orientation.

The initial part of the full 90 second sequences from both the the Basler and FLIR cameras can be seen at the Specialised Imaging YouTube channel and below. 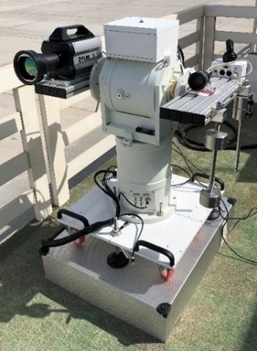