Research at the University of Michigan used a Specialised Imaging SIMD16 ultra high speed multi-channel framing camera to capture images of bursting microscopic droplets releasing the fluid within by focused ultrasound, and ultimately understand how this process can safely and effectively be applied to the delivery of drugs within the body.

Imagine medical ultrasound propagating waves through the body at approximately one million cycles per second. Within the body, the waves encounter carrier droplets filled with a drug or therapeutic payload. The acoustic pulse of the ultrasound expands and contracts these carrier droplets until they burst and release their contents, delivering them at exactly the right place and at exactly the right time, without damaging any surrounding living tissues, structures, or fluids. Pursuit of a safe and precise way of applying acoustic droplet vaporisation (ADV) to burst perfluorocarbon (PFC) ‘shell’ carrier droplets was one aim of Prof. Oliver Kripfgans and his colleagues, including Prof. Mario Fabiilli, at the University of Michigan.

One of the main challenges the researchers faced was the micrometre length scale of the droplets they wanted to observe. To see the droplets with enough detail required zooming into a 20 m x 20 m area to view a single droplet just two or three microns in diameter to observe it burst. The set up mounted the camera on a large optical “bread board” that was supported vertically above a standard laboratory microscope. A flow tube containing fluid was placed below the microscope objective. To find a droplet, the field of view was initially large (1 mm x 1 mm) using 10x magnification. Once a droplet was found, its position was centred in the field of view using a fine adjustment pump before increasing the magnification to 100x.

The ultrasound beam was aligned with the camera field of view to ensure correct and repeatable ultrasound application on the droplet. 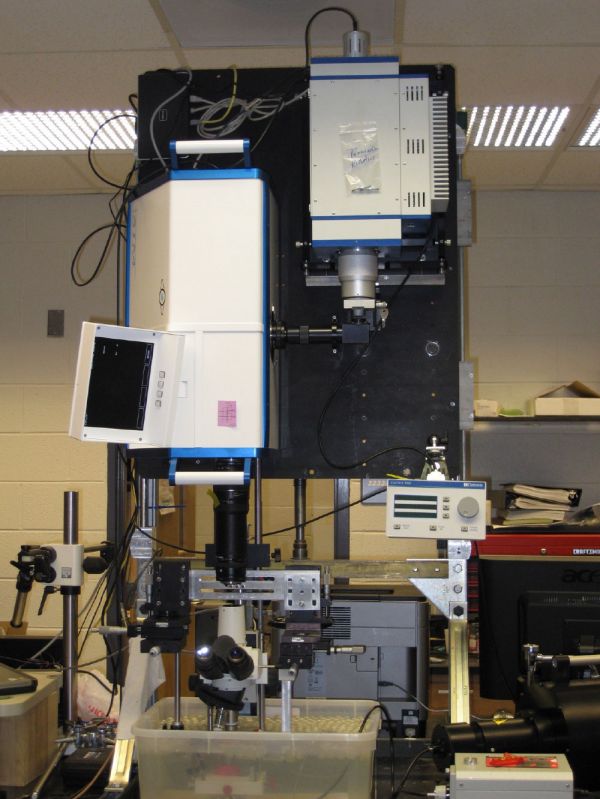 The SIMD16 camera offered Prof. Oliver Kripfgans’ team sixteen full frame images (1360 x 1024 pixel resolutions), at frame rates of up to 200Mfps. Ultimately, the team chose the SIM because of its ability to capture clear images of both short and long term behaviour of an event by independently configuring each image channel – delay from trigger, exposure time, intensifier gain etc. and the unique feature of acquiring simultaneous streak camera image data using the same optical path.

The second challenge of the experiment was achieving sufficient lighting. The use of a microscope to achieve the micrometre scale observation window had the inherent negative effect on the amount of light transmitted to the camera. To overcome this, the team used an SI-IF300 (300 Joule, 12 s) flash system with fibre optic output, which provided enough light for the duration of all the events to be captured.

Specialised Imaging’s equipment made capturing the necessary images possible, the sensitivity of camera and power of light compensated for the inefficiency of the microscope. - Prof. Oliver Kripfgans

The resulting images include frames before, during and after the ultrasound arrival. Although the number of images captured was 16, this was sufficient to observe the expansion and contraction of the internal fluid prior to the droplet shell bursting as shown below. 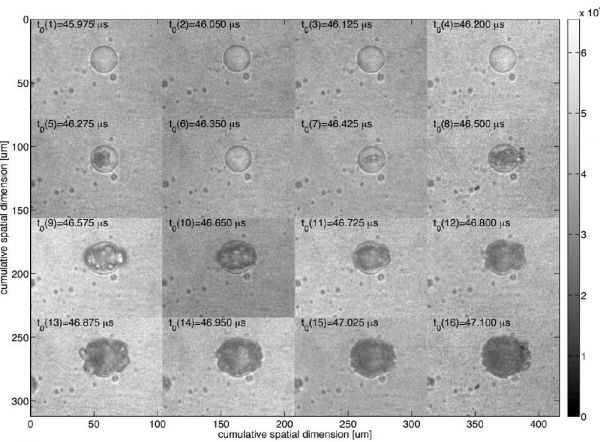 To assist with capturing more data between consecutive (or alternate) images, an Optronis SC10 streak camera, sharing the same optical path as the framing camera, was used to identify events and refine exposure delays of the framing camera. Images from the streak camera provide continuous 1-dimensional image data across the centre of the framing camera field of view (either left to right or top to bottom) with 15.6 ns between lines. The example below is an early streak image captured with a top to bottom streak “slit”. This clearly shows the number of oscillations before the eventual bursting of a droplet.

Repetition enabled the team to establish how many acoustic cycles are required to explode the droplets, see the different patterns created and understand how droplets affect each other, and other objects in the immediate area.

Establishing the performance of ADV

Research performed by Prof. Fabiilli evidenced that ADV offers an unparalleled advantage in drug administration, with the ability to precisely control where and when drugs, or other therapeutic agents can be delivered within a body. This method is far more targeted with less collateral damage than more traditional methods of drug delivery, which flood the patient’s system with much higher drug doses to achieve the same effect, but cause problems elsewhere in the body. Example applications for ADV could include intravenous therapy for prostrate or breast cancer, where droplets injected into the blood stream would be activated at the relevant site. In the regrowth of blood vessels after ischemic damage, droplets containing promoters for vascular growth could be introduced during surgery on a scaffold implant then activated in situ by ADV at intervals to assist recovery.

Research established that ADV can be used to release more than one drug, monitoring drug A, and then releasing drug B when appropriate. Ultra high speed imaging has enabled an understanding of the interaction between two carriers. Without the SIMD16 and streak cameras, a whole dimension of information would be missing from this understanding.

Working with our clients to help them achieve their objectives

In 2007-8 when the University of Michigan purchased the SIMD16, it was the only camera capable of capturing 16 images with the ability to integrate an external streak camera without sacrificing a channel (2 images) to provide simultaneous full frame and streak data. The solution proposed by Specialised Imaging’s SIMD16 and IF300 flash lamps was unique in terms of delivering the required setup flexibility with a suitable lighting source. Specialised Imaging was very much the tool maker and Prof. Kripfgans the machinist. We delivered the tools he needed to orchestrate his experiment.

Specialised Imaging is user orientated and flexible by desire, always aiming to deliver the highest quality and to meet, and hopefully exceed, client expectations in terms of both product performance and service. In the case of the SIMD16, which was very new at the time of the University of Michigan research, we were able to respond quickly to feedback from Oliver. For example, we modified the software so that the camera could be triggered manually while in focus mode at the precise instant when the micro droplet was in the correct field of view. We try to be as available as possible, appreciating that the users of our cameras and equipment do not necessarily keep to regular working hours!

Where is the University of Michigan’s SIMD16 after over a decade of use?

Profs. Kripfgans and Fabiilli, and their group, continue to use the SIMD16 on a weekly basis, for the originally envisaged research of medical drug delivery using ultrasound techniques. Prof. Kripfgans was very enthusiastic to explain to us the research aims, methods employed and results using this unique combination of SIM framing camera and Streak camera instrumentation, and we thank him for his valuable time.