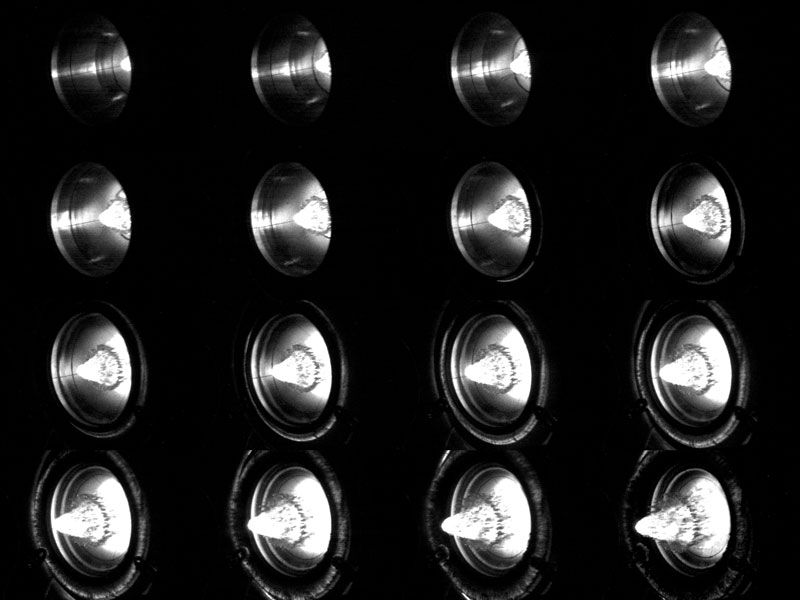 Some events are just too fast for the naked eye to see, or conventional high-speed video camera to capture. To really understand what’s happening during a very short duration event it is necessary to capture as many consecutive images as possible using an ultra-high speed framing camera, like our SIM-D. Using these cameras, it’s possible to capture events like shaped charge sequence shown here, which is typical of the type of applications a SIMD is used for.

Shaped charges are designed to focus explosive energy, and are inherently dangerous, very fast, very bright and extremely difficult to capture. Essentially, they comprise a “V” shaped or conical liner in front of an explosive. Applications are where a quick, decisive and once only opportunity to cut is required - for example, defeating armour as shown here, but also in the oil industry, to cut pipes or perforate reservoirs in offshore oilfields or during building demolition to cut through metal beams or columns. A shaped charge was even used by the Hayabusa2 mission to clear a crater on the162173 Ryugu asteroid to provide pristine samples.

This sequence captured by a Specialised Imaging SIMD camera, shows the collapsing cone of a shaped charge forming a very fast liquid metal jet. The purpose of capturing the sequence was to check whether the jet formation from the liner is axisymmetric, developing as expected and adds information when assessing the penetration performance of different designs through a set of target plates. The images here show 75% of the cone shaped liner and 50% of the jet to be observed, making assessment possible from one camera viewpoint.

The incandescent tip of the jet is travelling between 5 – 10km/s making it extraordinarily difficult to capture. To give this a context, it is roughly equivalent to 11,000 – 22,000 mph, which is in the range that the space shuttles travelled at during re-entry. To further complicate matters, the use of explosives causes the jet to be much brighter than the liner causing over exposure of the jet - or under exposure of the liner. To achieve useable images by reducing the potential over or under exposure and see both the jet and liner requires the use of a laser illuminator and narrow band pass filter in front of the camera lens. This filter only passes the wavelength of light from the illuminating SI-LUX laser and event through to the camera. This technique is also used to capture other self-illuminating events such as welding.

Despite the speed, brightness and hazardous nature of a shaped charge, our combined solution of SIMD camera and SI-LUX laser, was able to capture the required sequence, aid the performance assessment of the charge, and ultimately further the client’s research. We are one of the few companies in the world capable of providing complete solutions to capture these types of events.